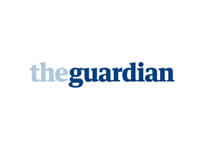 They call it “pave, pipe, and pump”: the mentality that has dominated urban development for over a century.

Along with the explosion of the motorcar in the early 20th century came paved surfaces. Rainwater – instead of being sucked up by plants, evaporating, or filtering through the ground back to rivers and lakes – was suddenly forced to slide over pavements and roads into drains, pipes and sewers.

Their maximum capacities are based on scenarios such as 10-year storms. And once they clog, the water – with nowhere else to go – simply rises.

The reality of climate change and more frequent and intense downpours has exposedthe hubris of this approach. As the recent floods from Bangladesh to Texas show, it’s not just the unprecedented magnitude of storms that can cause disaster: it’s urbanisation. 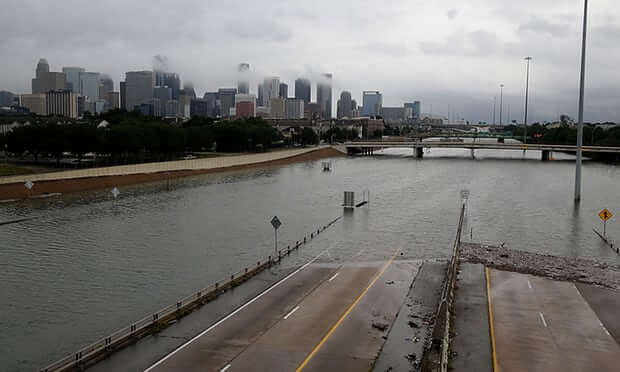 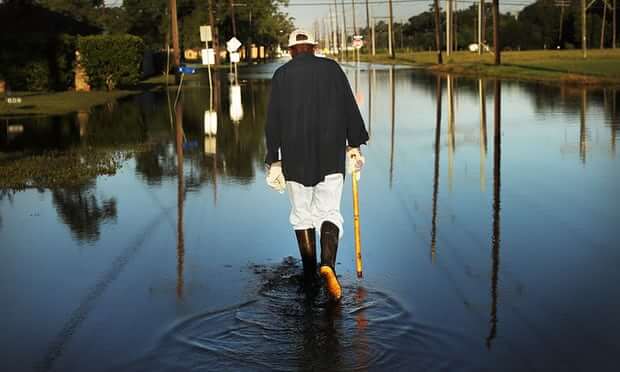 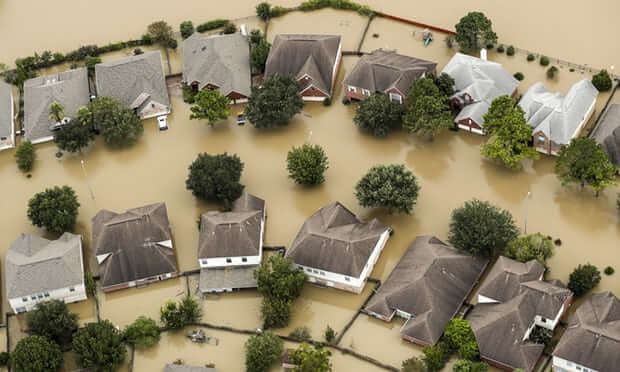 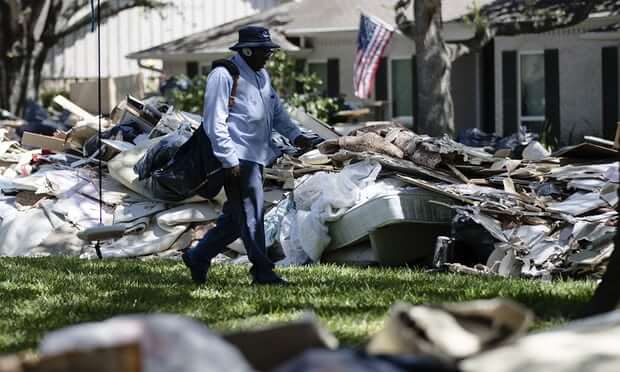 Hurricane Harvey displaced more than one million people, resulted in at least 44 deaths and damaged 185,000 homes in Houston alone
The US National Weather Service said the “breadth and intensity” of the rainfall that came with Hurricane Harvey in late August was “catastrophic”, and “beyond anything experienced before” – the city was overwhelmed with devastating speed, as can happen in areas where much of the land is paved.

A recent survey of global city authorities carried out by the environmental non-profit CDP found 103 cities were at serious risk of flooding.

With climate change both a reality and threat, many architects and urbanists are pushing creative initiatives for cities that treat stormwater as a resource, rather than a hazard. 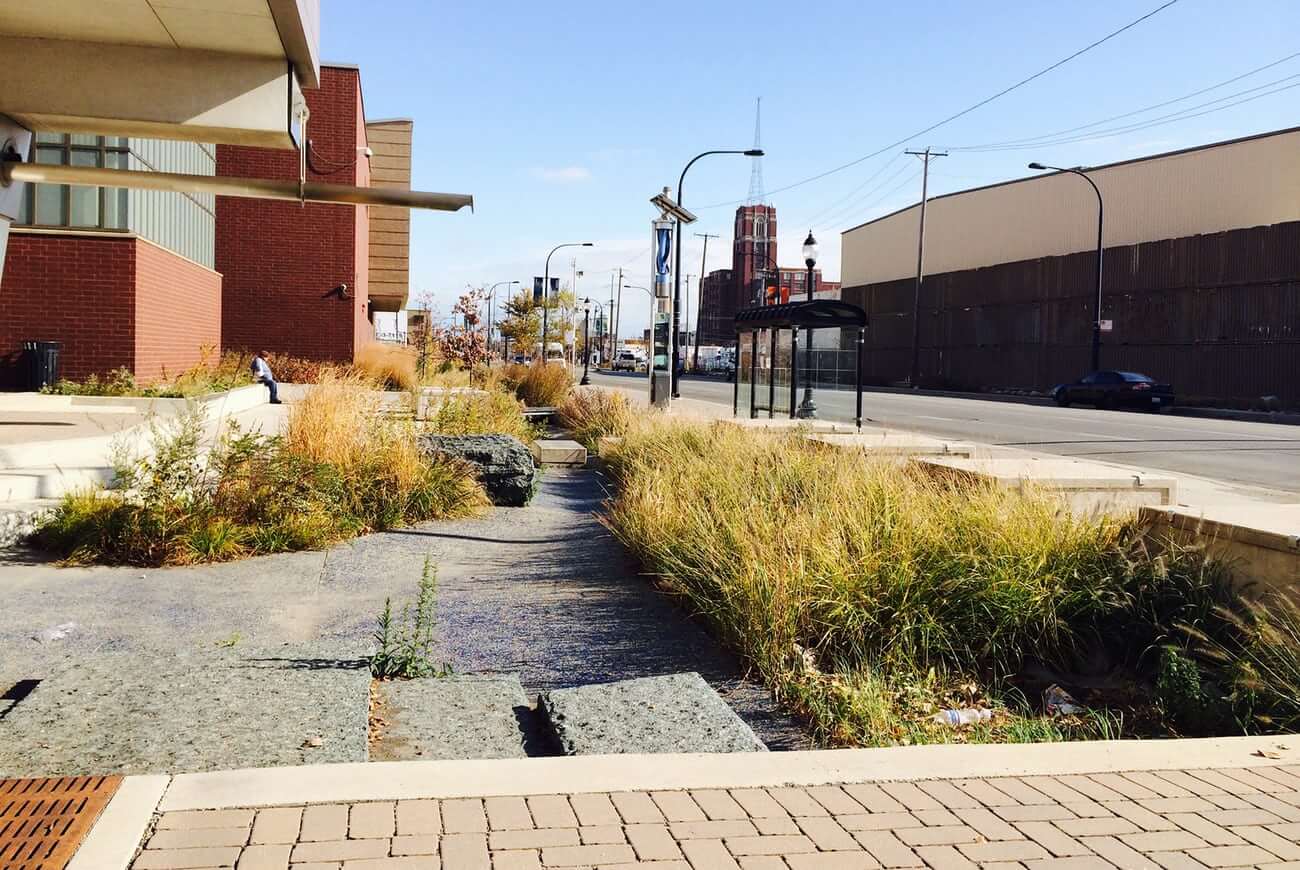 One city already preparing for a climate future – or present – is Chicago, parts of which saw almost 20cm of rain in four days this July. It is projected to have 40% more winter precipitation by the end of this century.

The city has poured significant investment into reimagining stormwater management over the last decade, including building more than 100 “Green Alleys” – permeable pavement that allows stormwater to filter through and drain into the ground – built since 2006.

It’s very simple, but it’s very difficult for people to grasp, because we’ve not designed like that in a century

Jay Womack
The most advanced is the two-mile “sustainable streetscape” across Cermak Rd and Blue Island Ave in Pilsen, in Chicago’s Lower West Side. Once a crumbling asphalt strip inclined to flood, today it is “the greenest street in America”: a $15m showcase for cutting-edge ecological technologies such as photocatalytic cement to reduce smog and landscaped shallow troughs known as bioswales, which act as environmentally-friendly drainage, filtering and absorb polluted water.

On the Pilsen Sustainable Street, rainwater travels through the sidewalk to porous rock, where it is decontaminated by microbes. It then goes onto feed surrounding plants, or it filters through sand deep in the ground to make its way back to Lake Michigan. 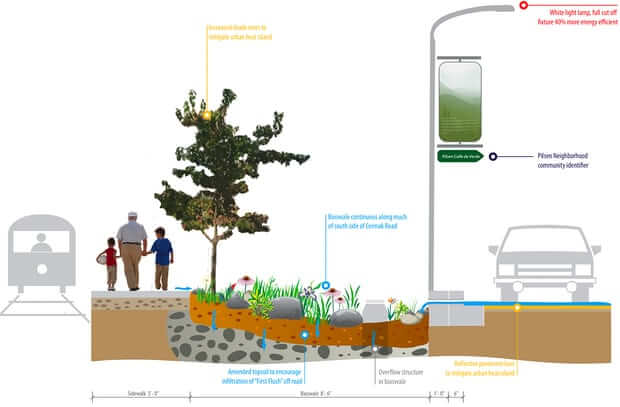 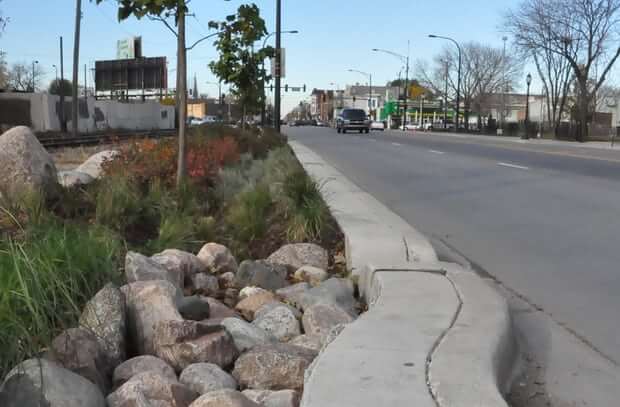 Rainwater travels through the self-cleaning, pollution-reducing sidewalk before going on to feed surrounding plants
In this way, 80% of rainfall is diverted from the sewage system, and the road no longer floods, says Jay Womack, a senior landscape architect at Huff & Huff, which was commissioned to design the street.

“We try to create porosity and permeability so that water can move in the ways that it moves in the hydrological cycle,” says Womack. “It’s very simple, but it’s very difficult for people to grasp, because we’ve not designed like that in a century.” 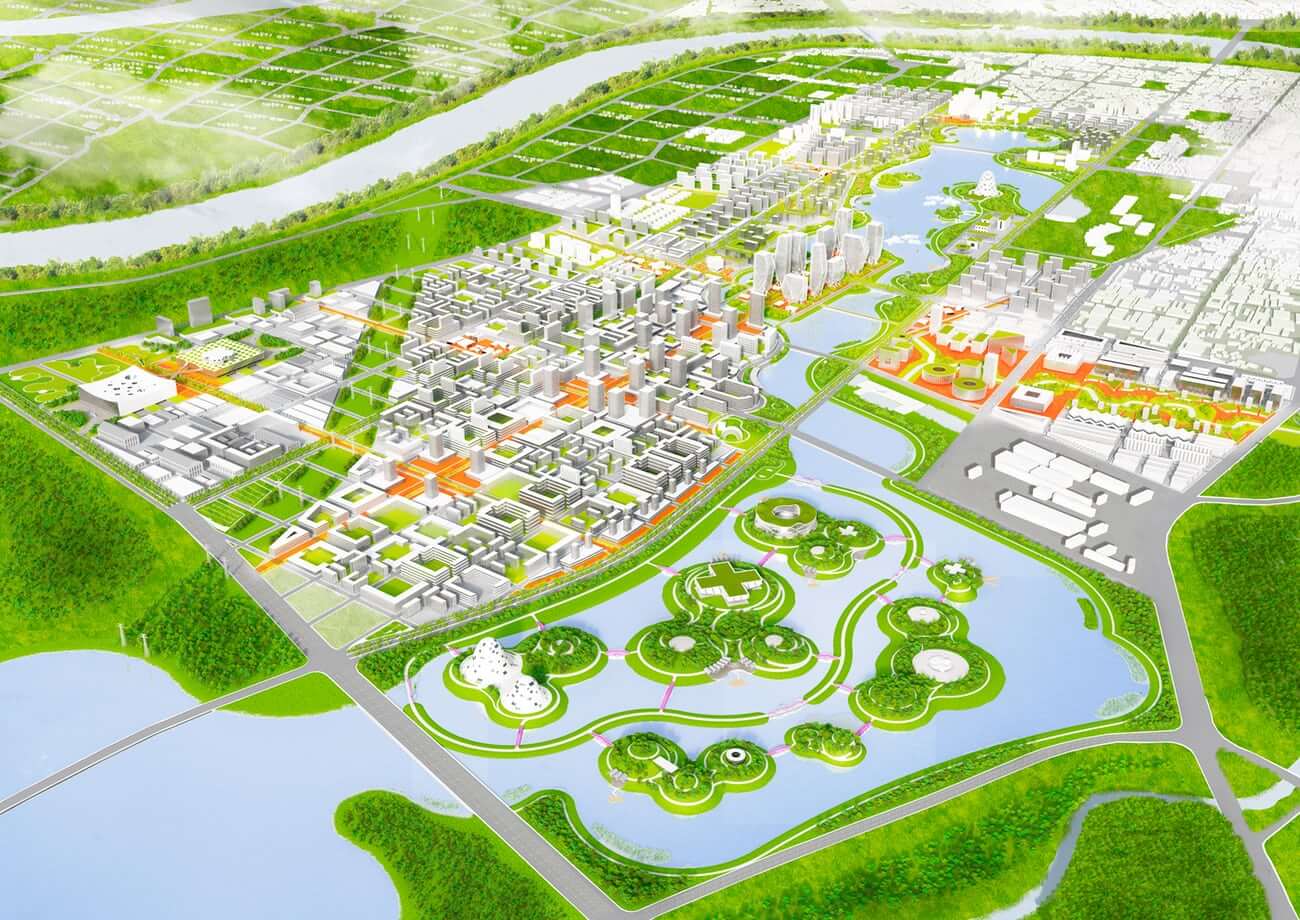 Lessons from Chicago are being applied in China, where the government has commissioned the construction of 16 “Sponge Cities” to pilot solutions for the freshwater scarcity and flooding suffered in many cities as a result of rapid urbanisation. Chicago architectural firm UrbanLab was commissioned to design the masterplan for Yangming Archipelago in Hunan province: a new centre within the larger city of Changde, devised as a “new model for the future”.

Changde’s ‘Eco-Boulevard’, in dry conditions (left) and wet (right)
The area, a low-lying land river basin that experiences heavy rainfall, is regularly flooded. Instead of incorporating defences against water, UrbanLab put space for it to flow at the centre of its urban plan, putting major buildings on islands in an enormous central lake. Canal-lined streets that UrbanLab call “Eco-boulevards” connect the eight districts – the process is visualised in this video.

UrbanLab says their vision combines a dense metropolis with a nature setting: “As a functional center, Yangming Archipelago will serve as an urban model, we expect it to lead the way to a new way of thinking about the city of the future.” 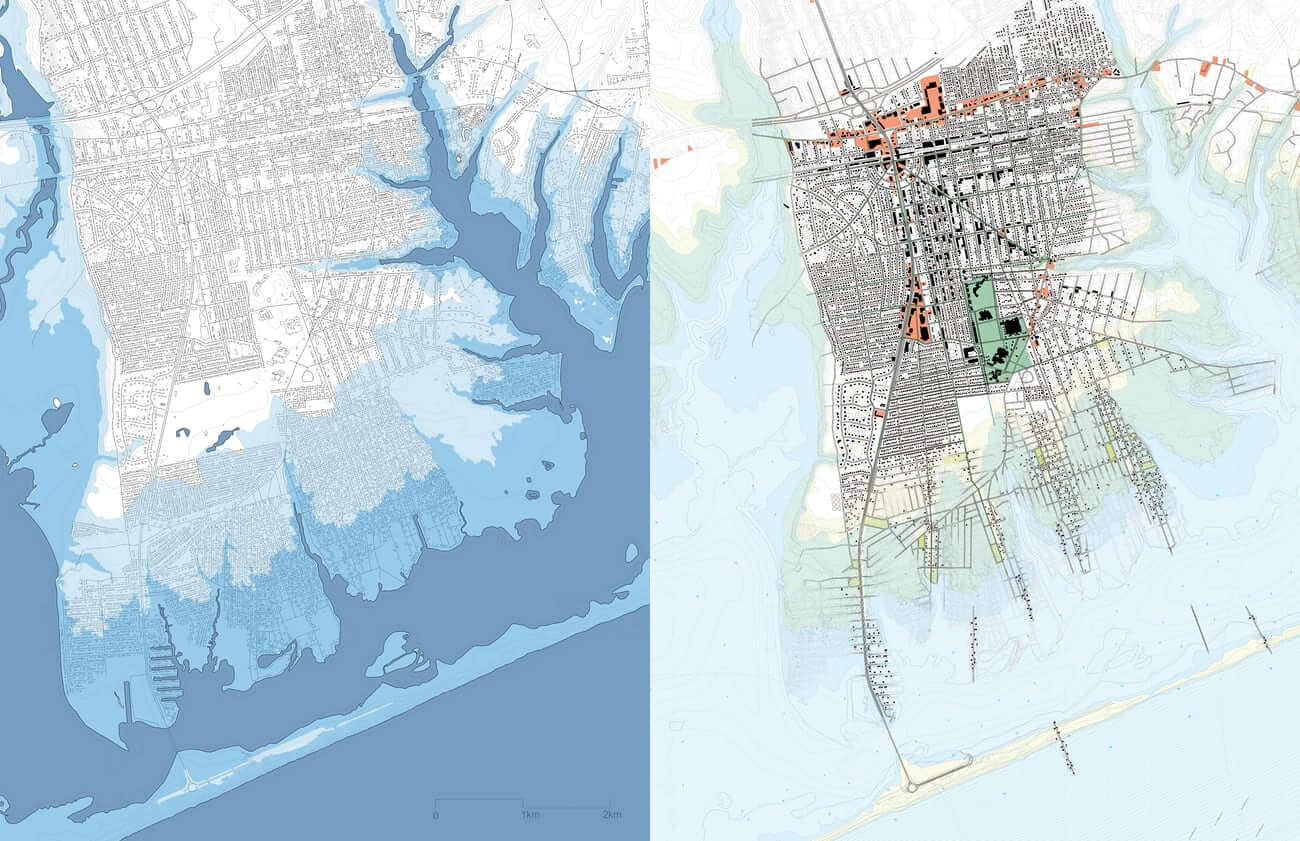 With 2.5 million residents of New York and New Jersey currently living within a designated flood zone, the Tri-State Region of the US is already vulnerable to flooding, and the outlook will only deteriorate with rising sea levels.

A cross-discipline team was commissioned by the Regional Plan Association and the Rockefeller Foundation to devise a response to the pressure put on the region’s coastlines within 50 years and six feet of sea-level rise. 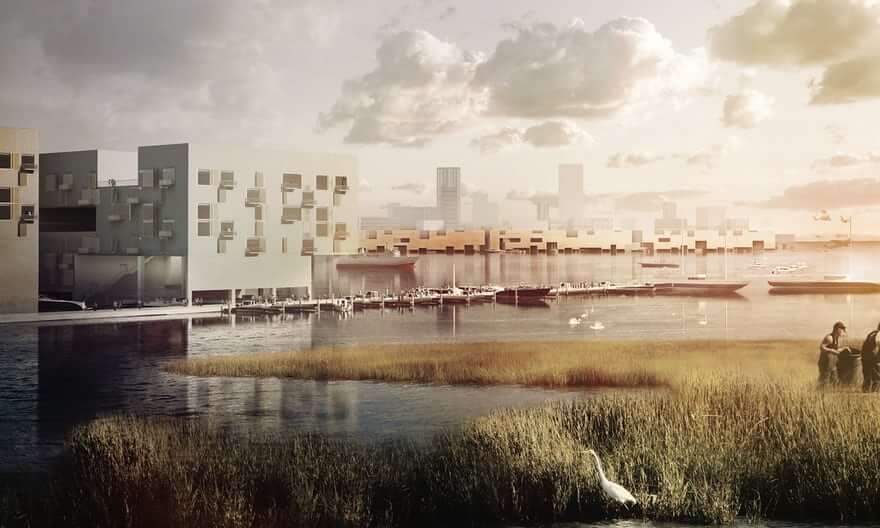 They proposed freezing future development on flood plains in favour of focusing new housing in the neighbourhoods of Brooklyn, Queens, Long Island and New Jersey along “corridors” and transit spines inland on higher ground.

The team reimagined The Bight, the notch in the region’s coast where ocean currents pile sand, as a new “landscape economic zone” that would blur the hard line between the city and the sea and create new spaces for habitation, conservation, work and play. 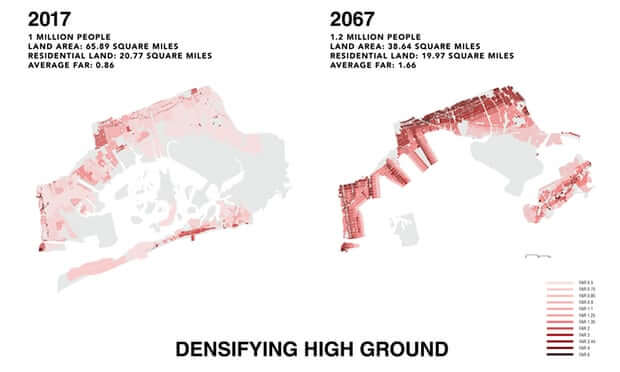 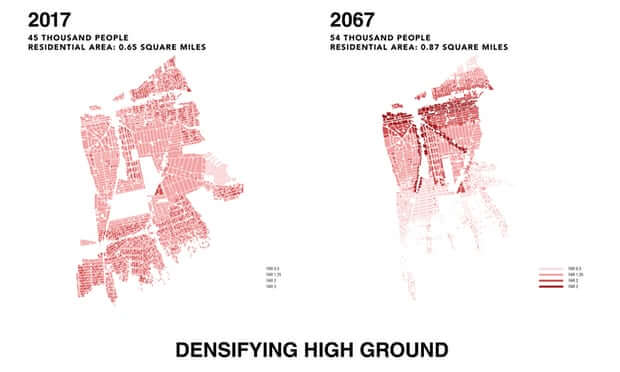 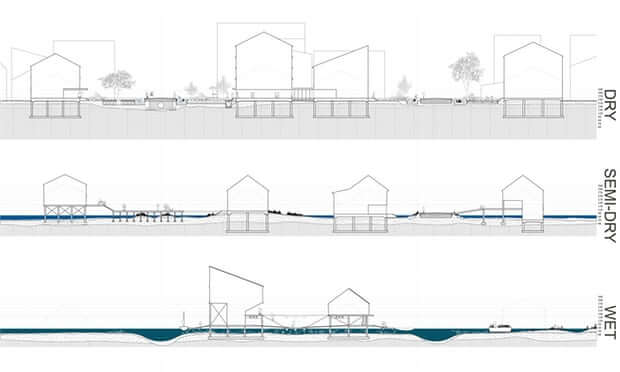 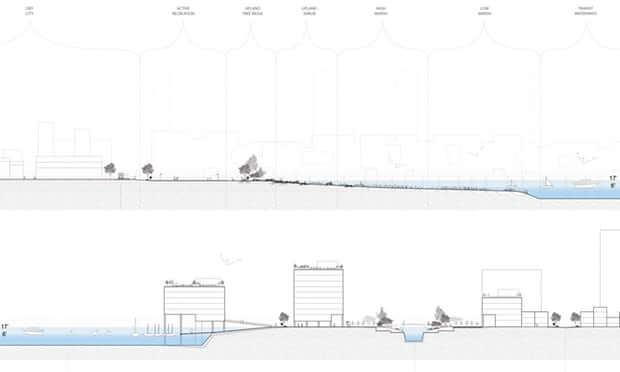 These cross-sections show how Segal and Drake’s team envisage buildings could exist on the shifting threshold of water and land. Click on the images to expand and see more detail
“Rather than futilely trying to hold the line, the zone’s mantra is ‘receive, protect, adapt’,” said Segal and Drake.

Per their vision, the coastline would be transformed into “the new urban frontier” with a vanishing barrier island at Sea Bright, NJ, by 2030; a retirement walkable community at Mastic Beach in NY by 2050; and New York City’s “new sunken central park” at Jamaica Bay by 2067.

Berms with benefits: a barrier with bike lanes and BRT too 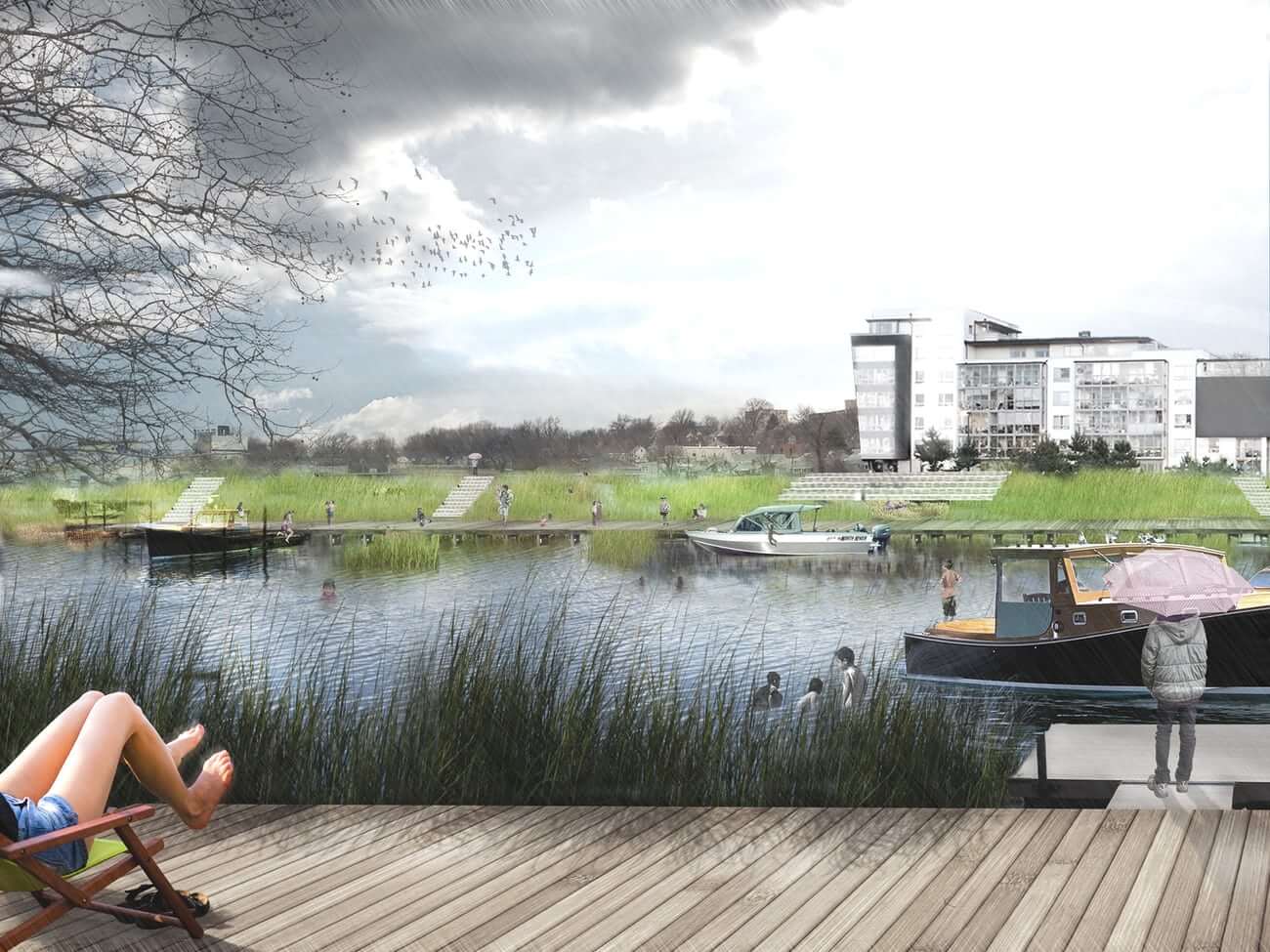 The stakes of failing to adapt to flood risk were made clear by Hurricane Sandy in 2012, which caused the deaths of 147 people and cost the US more than $50bn in damage.

One of the worst-affected areas was Meadowlands in New Jersey, a low-lying wetland basin bisected by the Hackensack river.

During the hurricane it was impossible to pump out water because of tidal flooding on the other side of the dike, and the area was devastated: houses filled with water, cars floated away, residents had to be rescued with boats, and critical infrastructure failed. 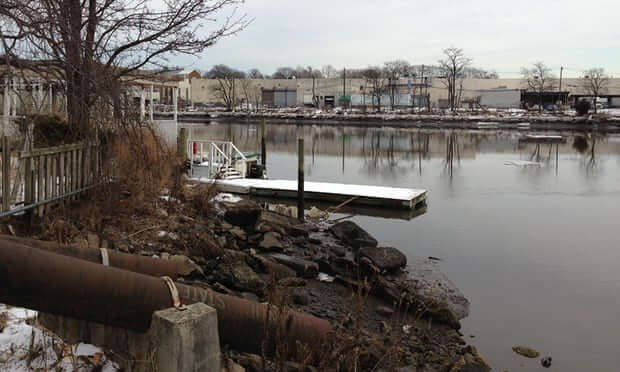 Kristian Koreman, a co-founder of ZUS, a Rotterdam-based architectural practice, says development had failed to take into account the local ecology.

“By neglecting the fact that they were building in a swamp, they forgot that it was a tidal area,” he says. “You can see that the water goes up and down every day, but with a real storm like Sandy, and a tidal flood plus heavy rain, water came from all sides and there was no way to escape that.”

By neglecting the fact that they were building in a swamp, they forgot that it was a tidal area

Kristian Koreman
In response to Sandy, ZUS partnered with MIT’s Center for Advanced Urbanism and De Urbanisten to devise New Meadowlands: a masterplan for combining flood resilience with recreational amenities through marshes and a system of parallel raised banks called berms. (The aerial rendering is shown at the top of this article.)

Between the outer berm and the sea, the restored wetlands would soak up seawater and slow down tidal waves, preventing them from hitting the dikes at high speed. The stretch of berms would serve as a wildlife refuge, filling up with rainwater during periods of heavy rain before draining out. And on the insider of the inner berm, ditches and ponds would retain rainwater, preventing it from causing sewers to overflow.

The first pilot project will focus on the towns of Little Ferry, Moonachie and Carlstadt, with $150m in funding from the US Department Housing and Urban Development.

Given the triple whammy of climate change, increasing urbanisation and budget constraints, infrastructure projects now have to serve multiple purposes: Koreman says the team were under pressure to deliver the most value per dollar possible.

Their plan includes a huge recreation zone, as well as bike lanes and a rapid transit bus lane running across the top of the berms to better connect Meadowlands to New York. ZUS sees its design as “berms with benefits”.

Floating pods – and beyond 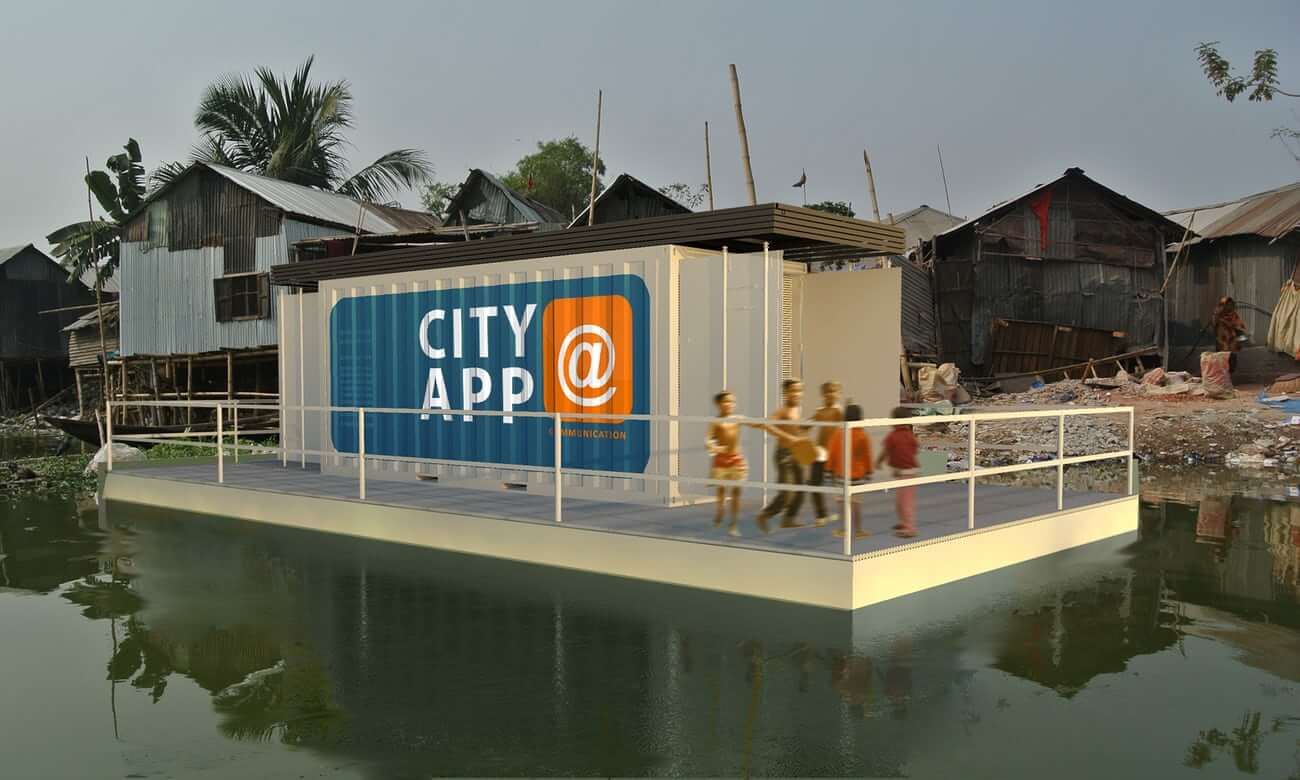 Koen Olthuis, the founder of Waterstudio, a Dutch architectural practice that builds exclusively floating and amphibious structures, believes the way to encourage flood resilience is to make sure it’s almost overshadowed by those other benefits.

Olthuis is trying to improve living standards in waterside slums by providing vital functions such as education, sanitation and power in floating shipping containers built on foundations made of thousands of waste plastic bottles. He calls the units “city apps” as they are easy to install and launch. Since they can be moved, they can be granted a temporary licence by city governments that normally prohibit development in illegal settlements; and because they float, they entice investors who would ordinarily shy from investing in a flood plain. 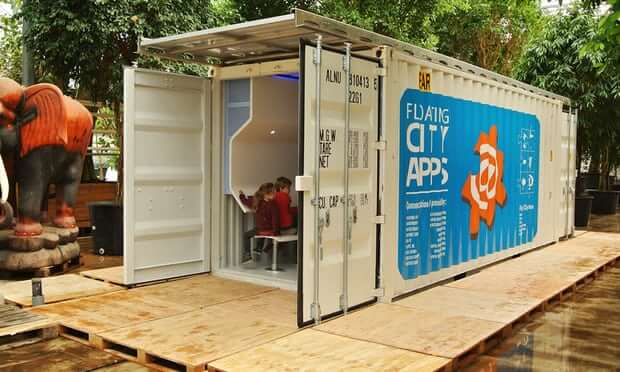 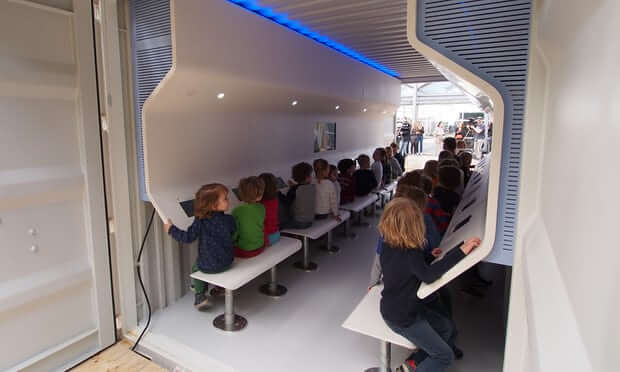 A City App used as a classroom
The first major project is in Korail, a slum on the waterside in Dhaka, Bangladesh, where five units will be arriving in October: a classroom, a sanitation unit, a kitchen and a battery pack connected to a floating solar field.

Olthuis says he works with nature, rather than treating it as a threat – which means letting water flow where it wants, and using floods as a catalyst for more flexible urban development. He talks of relieving crowding in cities by building amphibious architecture on flood plains, or augmenting a city with pop-up floating structures on waterways – concert halls, stadiums, even rescue and relief units during disasters.