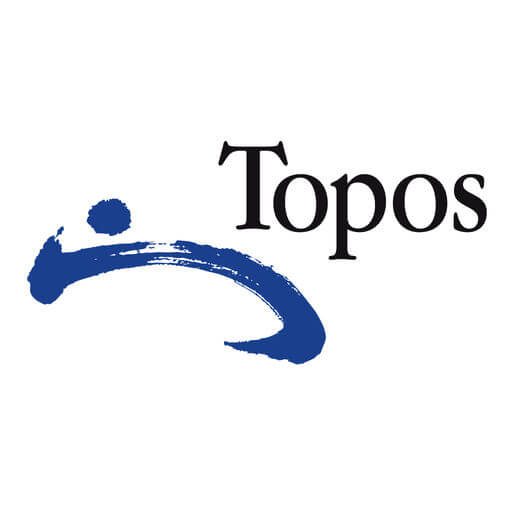 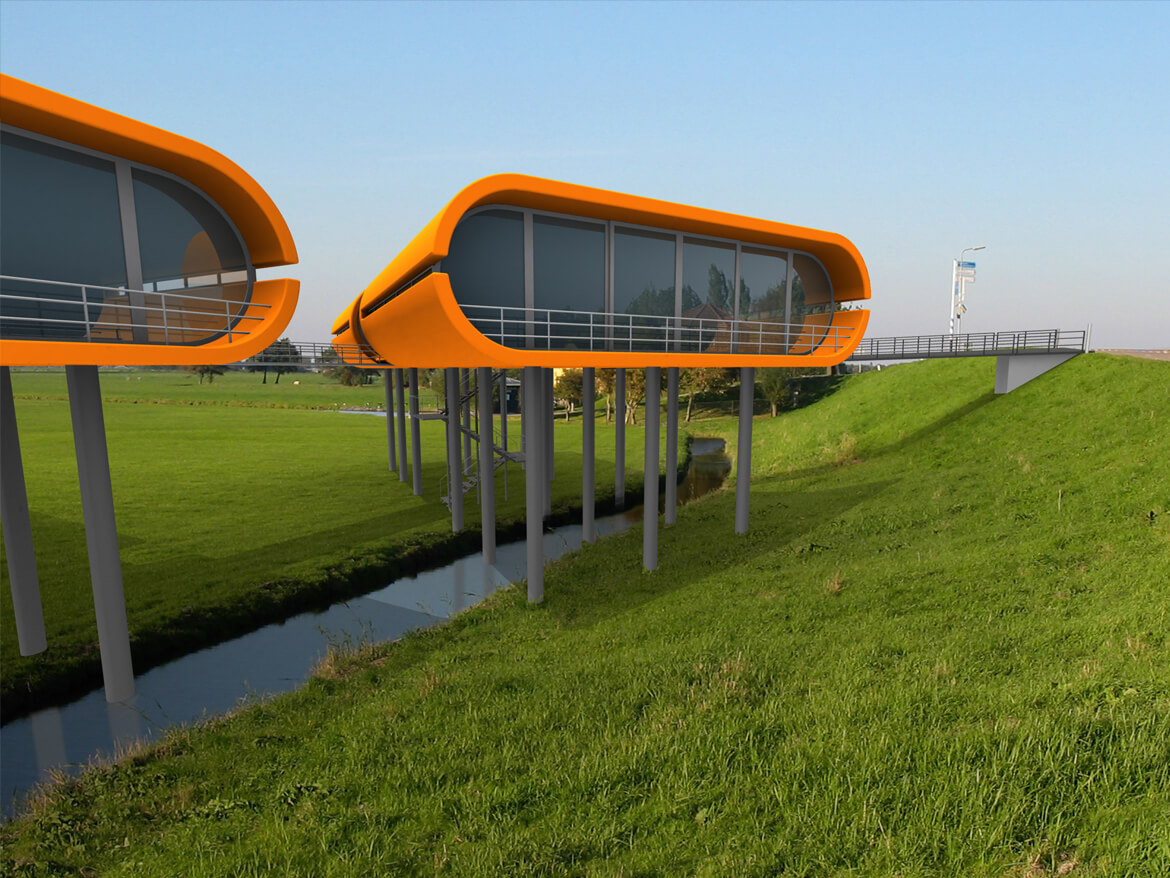 AT FIRST GLANCE it might not strike you, but many Dutch people live in the midst of a treacherous landscape. The story of the Dutch reclaiming their country from the sea is a familiar tale, but the fact that they are now well on their way to returning the land to that very same sea is something new, even for the majority of Dutch people. The increase in flooding because of climate change is, of course, the outcome of human behaviour, but that is not what I mean; in general, the dikes here still fulfil their protective task. The danger lies in the land behind the dikes, the polders, which are subsiding ever further because of urbanization and highly effective water management systems. Architecture and urban development are increasingly capitalizing on this, by coincidence but also intentionally.

Until the 1960s, the dynamism of water was a natural fact. When building a house in an area that might be flooded you laid flagstones in your living room instead of a parquet floor. If the water rose then you moved the furniture to the first floor and went to lodge with family elsewhere. Once the water level had fallen you scrubbed the floors and put the furniture back in its place. Since the 1960s, the faith in our technical ability to control water has been growing, and as a result we have become less and less concerned about the sites used for construction. The state secretary still actually considers it a ‘tremendous challenge’ to build at the lowest point in the Netherlands, which is about six metres below sea level. It is our heart’s desire to live overlooking water, and to achieve this we are all too happy to re-excavate previously filled-in urban canals. The water is an enemy that has become a friend, and our understanding of the true dynamism of water and its perceived image have become increasingly estranged.

Thanks to our engineering acuity it was possible to construct part of the Randstad urban conurbation on the waterlogged soil of a former morass. Houses are built on piles that sometimes have to be driven to a depth of thirty metres in order to reach the solidity of the sand layer beneath the peat, a substratum that will no longer subside. However, that is prohibitively expensive for roadways, footpaths, parks and gardens, which are subsequently lain on a layer of sand that is a ‘mere’ metre or two deep. A layer like this stabilizes the unstable topsoil a little and, at least on completion, looks very trustworthy. However, this semblance of stability leads to absurd situations. Any weight that rests on the unstable soil compresses it, and pumping off water, made necessary by the situation below sea level, lends a helping hand. With every new layer of sand that is added to keep houses accessible the ground subsides even faster. It is a process that is unstoppable. In the city of Gouda, midway halfway between Utrecht and Rotterdam, there are roads that people suspect are now between 8 and 12 metres thick. Layer upon layer of asphalt has been added on top of the roads that are sinking into the peat in order to maintain them at surface level and to make them appear stable. This fixation on the superficial pretence of stability typifies many of today’s trends in spatial planning and water management

In many new residential districts, the soggy ground is hardly even taken into account. The engineers simply spray on a two-metre layer of sand in order to stabilize the watery and unstable subsoil, whereupon construction can begin. By a circuitous route, that water has recently started to find its way back to the surface. In order to gain the confidence of the homebuyer, developers make every effort to imbue the new residential areas with individuality, authenticity and identity. Oddly enough, this identity is not sought in the landscape in the midst of which the property is being built – in any case, that landscape has been completely eradicated by the addition of a layer of sand – but is usually conceived afterwards. After all the problems of development, land parcellation, infrastructure and water management have been solved, it is time to consider identity. Then the landscape-related elements or the location’s original qualities can be reintroduced, but in a manageable and symbolic manner. And ‘water’ is then seized upon enthusiastically at places where it in fact plays a much more essential role, as at the VINEX development site of Carnisselanden near Barendrecht, just south of Rotterdam. The ‘soundings’ to determine the soil quality here were not quite sufficiently detailed to gain a true impression of the former marshland. The geological survey therefore confused the traces of an old creek with a thick layer of peat. And as a result of the creek’s layer of ‘thick water’, the sewers that were installed on Friday had already sunk to an undetectable depth by Monday. Later on, at the same site as the ‘disappearing’ sewers, a series of ‘lighthouse dwellings’ was realized, giving the spot a readily marketable identity and reflecting the connection with water. This relationship was initially left unacknowledged, then combatted, and ultimately represented in a ridiculous way.

This example demonstrates that in the quest for identity its most important vectors are often missed. These ‘bearers’ of identity have for a very long time been the specific limitations of a site within which a particular development ambition has to be conceived and realized. For centuries, limitations were the most effective shapers of our ambitions and therefore prescribed our built identity. Nowadays we resolve the limitations using technical means and contrive an identity afterwards. To this end, it is often the icons that have evolved over time that are copied, such as lighthouse dwellings, typical dike and bridge houses or windmills, but we fail to develop new icons. Proceeding from this idea, I devised the ‘Amphibious Living’ project in 2000, a project that generated many potential new icons for settlement and for water.

No more than a decade ago, you could receive a premium from Gouda City Council if you abandoned your houseboat and allowed it to be demolished. Houseboats were then still subject to the municipality’s legislation on slum dwellings. Even a city like Amsterdam has never been truly happy with the houseboats lining its canals. They certainly provide picturesque photo opportunities, but they are an untidy eyesore amid the cityscape, they constitute a safety risk and they discharge sewage directly into the canal. Houseboats were legally considered to be moveable property and were therefore ineligible for a mortgage or for rent subsidy. It was usually DIY adventurers who made their home on the water. However, this policy shifted about five years ago. Alongside increasing prosperity and liberalization of the housing market this was primarily driven by the abovementioned quest for identity in the built environment. Living alongside water had been a guaranteed sales hit for a long time already, but living on water was now deemed worthy of a mortgage as well.

In more and more expansion plans, plots are being reserved for floating dwellings in developments with overblown names such as ‘Water Gardens’, ‘Blue City’ or ‘Gold Coast’. The lakes and canals in these newly built neighbourhoods are also mockingly called ‘estate agent’s water’. Thanks to the introduction of tailor-made mortgages and to a number of ‘water villas’ being realized by respected architects such as Herman Hertzberger and Art Zaaijer, living on water has transcended the world of adventurers and odd-jobbers and has become socially desirable. This goes hand in hand with the image of freedom and independence that is associated with living on water. The floating dwellings can be turned to face the sun or even moved to a completely different location. The reality is different, of course, because the plots are usually so confined that there is not much chance of being able to turn, and the dwellings are generally fitted with every modern convenience and are therefore wholly dependent on the umbilical cord of mains and amenities at their moorings. These mooring places are limited in number, so the dwelling cannot be tied up anywhere, to say nothing of the often insurmountable obstacles such as bridges and dikes that the dwelling would encounter en route from one berth to another. The freedom and independence of the marketing brochures therefore rely on suggestion, but that is precisely the level at which they work best. The inhabitants of floating dwellings are generally very fond of their comfort and security. They are primarily seeking the image of independence and the sense of freedom without having to suffer the negative consequences.

For the housing market, the quest to distinctively combine human settlement and water has become a welcome and rewarding theme. Architecture bureaus with names such as Aquatecture and Waterstudio are capitalizing on this trend and present their concept dwellings in catalogues. Living with water has become a commodity to be reckoned with, for which water is even artificially created. In the economically weak region of East Groningen, in the north of the Netherlands, a public-private partnership is developing an 800-hectare expanse of agricultural land that has been re-flooded in order to establish an ideal residential and recreational environment. This project also draws on the positive identity of water: as a bringer of peace and quiet, an element that creates space, a recreational lake and a mirror for the architecture.

Now it is the government that is starting to develop an eye for the identity-imbuing power of water. A body of water is not only the surface, but also has a bottom. The use of agricultural pesticides over the decades has resulted in the accumulation of highly polluted sludge at the bottom of expanses of water and waterways. Intriguing alternatives have been devised for the expensive process of dredging up and transporting this polluted sludge. Sealing the dredged-up sludge in containers and using these to raise traditional ‘terps’ (mounds historically constructed to provide a safe human settlement) in areas prone to flooding would generate identity that springs from solving a problem.

Experiments in river forelands have also been promoted recently. In the knowledge that total water management is no longer feasible, the government has commissioned research into how human settlement and unstable water levels might be reconciled. The river forelands are the ideal testing ground for this. Inadvertently, the many luxurious floating villas on the quiet and stable recreational lakes will then be best prepared for that prospective instability or deluge. And then their inhabitants can at last truly put into practice the image of freedom and independence to which they aspire.