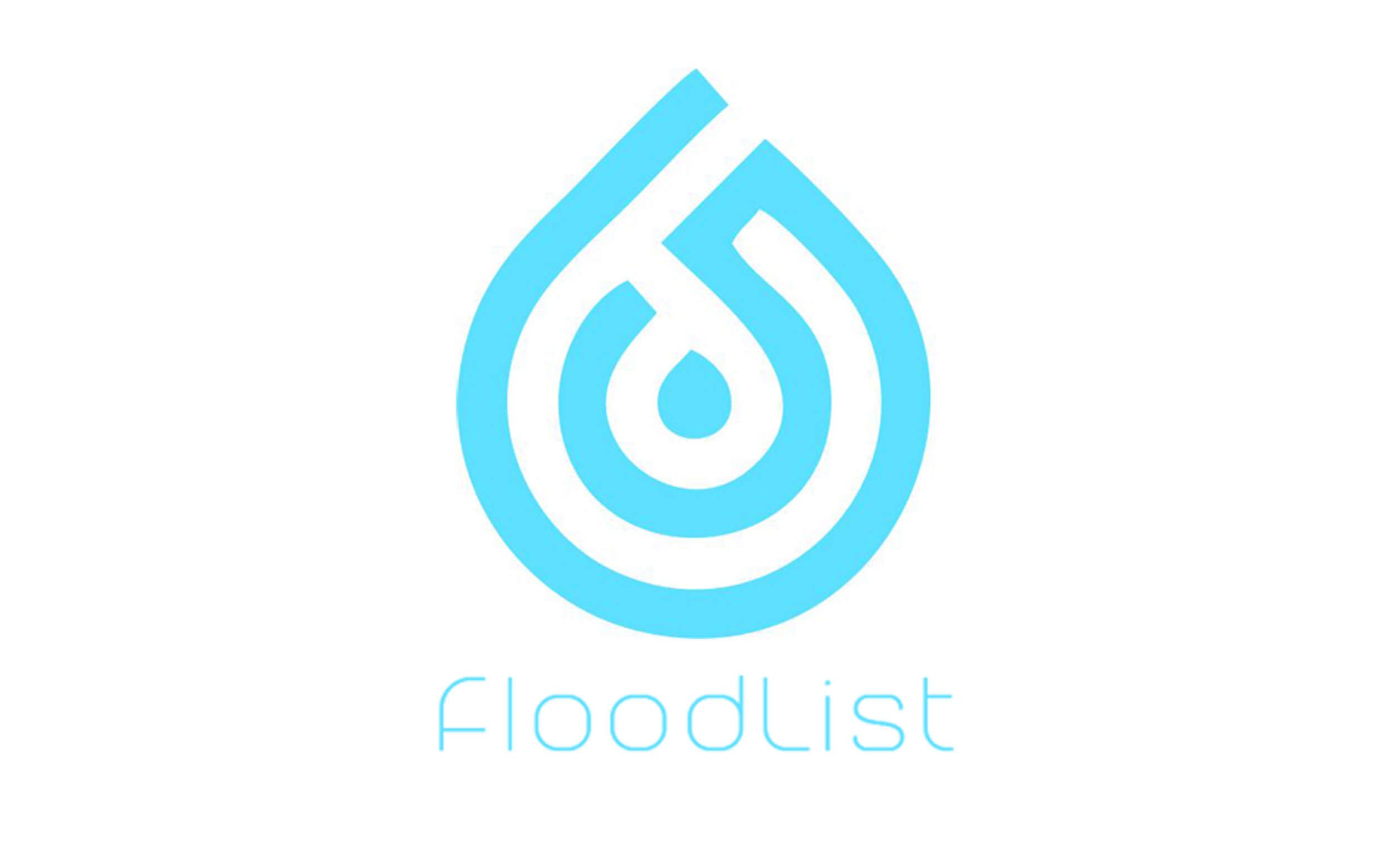 A previous article in our series on floating architecture highlighted the work of Dutch architecture firm Architectstudio Marlies Bohmer in creating the floating community of Waterbuurt in Amsterdam. The point was made that, although it is in a developed country, it is one of the first working examples of a floating community not made up of houseboats, but actual dwellings. Another interesting Dutch architecture firm looking into floating facilities for flood­prone communities is Waterstudio.nl, which, as the name implies, specializes in ‘waterborne architecture’. Waterstudio, in fact, designed several of the private floating houses of Waterbuurt, and also has designed a number of other floating houses around the world.

With about one billion people worldwide living in shantytowns, many of which are located in areas prone to flooding, the need for innovative solutions to providing decent shelter and facilities is growing daily. Since floodprone areas are least likely to receive investment for upgrading, architect Koen Olthuis of Waterstudio.nl has put forward a proposal for small scale floating facilities as a bottom up approach to improving opportunities in what he terms ‘wet slums’ – called Floating City Apps. 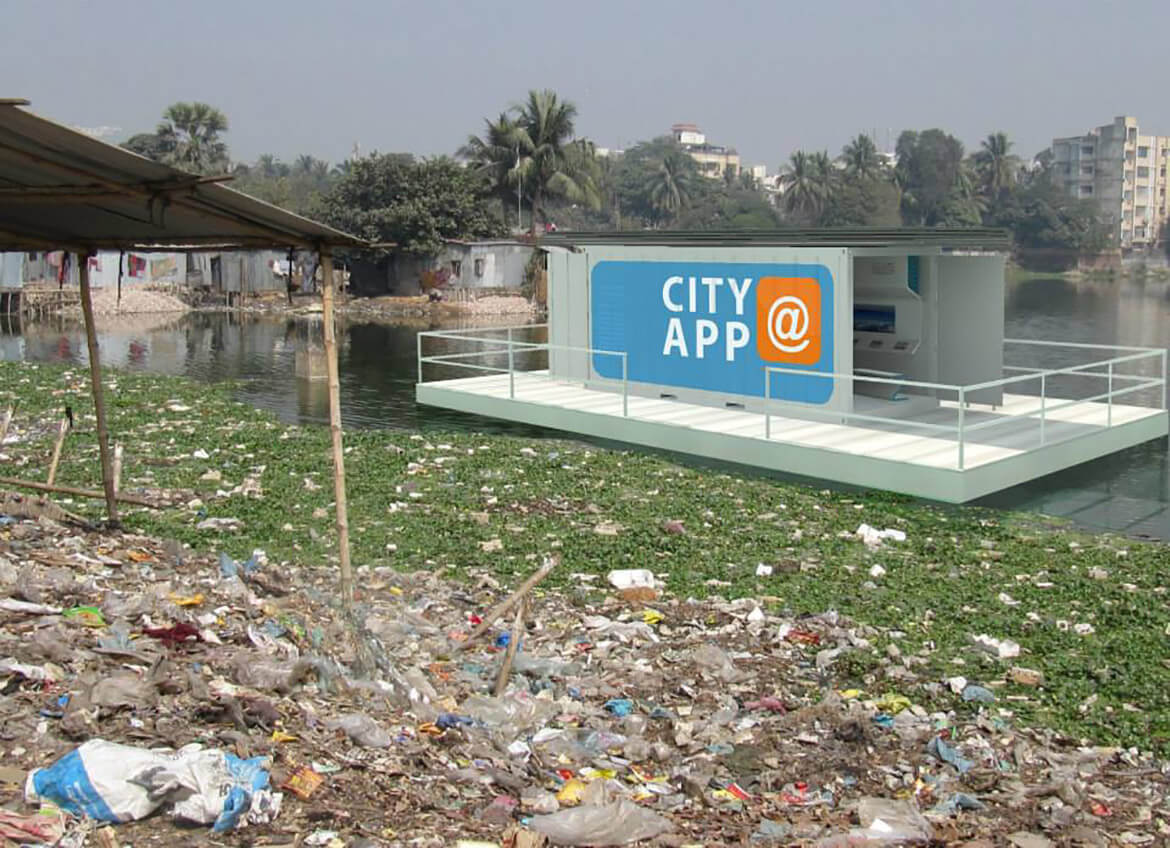 The Floating City App designed by Waterstudio is based on the concept of a floating shipping container fitted out for multi­purpose use. The first such unit, housing 20 tablet computer workstations and 2 teaching screens, will be utilised as a classroom during the day and an Internet café in the evening. The unit has a simple construction, the modified shipping container being fixed to a base of wooden pallets floating on a wire gabion framework containing bags filled with recycled PET bottles. 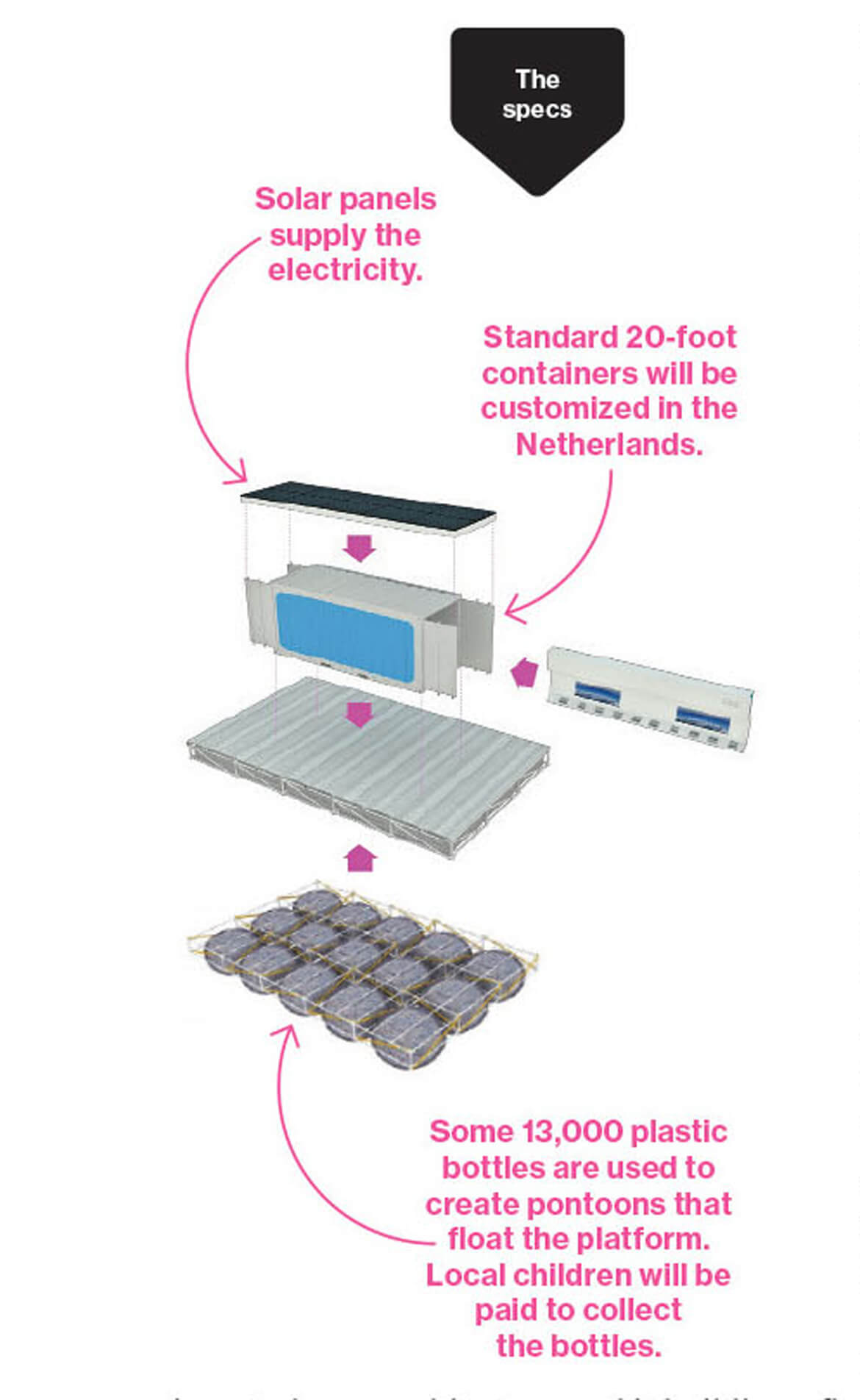 The materials for the floating base are readily obtainable in developing countries so the units are easily replicable. In addition, the idea of used PET bottles for flotation is intended to provide an avenue for recycling, in order to help keep waterways clear of plastic pollution. The interior of each City App container will be fitted in the Netherlands with built­in walls and equipment, purpose designed for the specific use it is intended for. In addition, it will have solar PV panels on the roof and solar power equipment installed behind the interior walls.

Floating City Apps have been designed for six different uses; communication & education, sanitation, community kitchen, health care, garbage collection and construction. The term City App was inspired by the concept of applications, or ‘apps’ found on mobile phones. Although several phones may look the same, each is different in terms of the apps that have been loaded onto it – hence the idea that the same floating container concept can be used for different purposes.

It costs about €50,000 (US$53,000) to design, build and deliver a floating City App and, in order to realize the implementation of the concept, the Floating City App Foundation was established with Dutch aid organization Cordaid in 2013. The foundation works with several partners, including the UNESCO­IHE Institute for Water Education, as well as authorities in the proposed recipient country. At a ceremony in Dhaka, Bangladesh, in June 2015, an agreement was signed between Floating City Apps, Cordaid and the Bangladeshi Computer Council of the Ministry of Post, Telecommunication and IT, in the presence of the State Minister of ICT, Mr Zunaid Ahmed Palak and the Dutch Minister of Infrastructure, Mrs Melanie Schultz, for the first Floating City App to be established in Bangladesh. Floating City App Bangladesh Netherlands Collaboration

Unesco­IHE Institute for Water Education assists Cordaid with a process of identifying and mapping sites for Floating City Apps. With the aid of local agents, a ‘wet slum’ is mapped and the needs of the community assessed in order to determine the most appropriate use or uses. Shipping containers will be fitted with the relevant Floating City App designs, and the containers shipped to the nearest destination port, from which they can be transported by road. The floating platform will be constructed on­site and the container will then be attached to the platform.

Chris Zevenbergen, Professor of Flood Resilience of Urban Systems at UNESCO­IHE Institute of Water Education notes that the Communication and Education App will be also used for early flood warning systems in these areas.

“We will provide recommendations to the World Bank to work differently with regard to slums upgrading” he says, “Not a one size fits all approach, but tailor made solutions for slums using local knowledge … investing in slums is not very attractive to donors. I hope this attitude changes, as slums are an important economy for the city. You can think of micro financing solutions for example”.

“Concrete solutions such as the City Apps developed by Koen Olthuis and partners should really help to attract financial support for further development” concludes Zevenbergen.

Olthuis says that there is a business model for the operation of the Floating City App. It will be leased to a local entrepreneur who will be able to provide the service to community members for a small fee. The repayment period is expected to be in the order of 20 to 30­odd years. If the situation changes and the App is no longer required or viable, it can be towed to another destination, or shipped back to the Netherlands for refitting or repurposing. Olthuis explains: “So these are catalyst functions for upgrading wet slums. We have a business model. If we want to upgrade life of the poorest worldwide, one billion people, we can’t just spend money and give them money, we have to provide the tools to upgrade the lives themselves, by providing them (with) these kinds of apps.”

Since the floating City Apps are technically classed as vessels, they can qualify for insurance and private financing, which should make them attractive options for local businesses. “Cordaid’s ambition is to co­create smart and sustainable solutions with businesses and local partners for people in need. Social enterprise holds the future” says Cordaid CFO Willem Jan van Wijk, adding “That is why we cooperated in the realization of the first Floating City App for Bangladesh.”

The first pilot Floating City App, containing the classroom, underwent its final testing for ‘sea­worthiness’ and stability in the Hofvijver in front of the Dutch Parliament Building in Den Hague, on 11 March 2016. This was accompanied by the official handing over of the App to the honorable Ambassador of Bangladesh, Mr Sheikh Mohammed Belal by the representative of The Hague Municipality, Mr Karsten Klein. The pilot communication and education Floating City App is expected to be shipped to Bangladesh early in 2017, where it will be sited on the Banani Lake adjacent to the Korail slum in the capital city, Dhaka. Korail covers 150 acres (61ha) of waterside land, mostly belonging to Bangladesh Telecommunications Company Ltd, and is home to over 40,000 residents. Many of the homes are built on stilts over the water, so the placing of a Floating City App on the water will be easily accessible and not out of place. “If I were to build only floating islands for the wealthy, I would only make 150 people happy in the next 50 years,” said Mr Olthuis, who is the grandson of both an architect and a shipbuilder; “If we use this technology also to upgrade slums, we can change the lives of millions.”