Architects from New York to Shanghai are increasingly being confronted with the same problem: Too little space for too many people. The challenge of developing new habitable spaces within the city is not easy. Many architects, contractors and urban planners are tackling this situation with floating architecture. 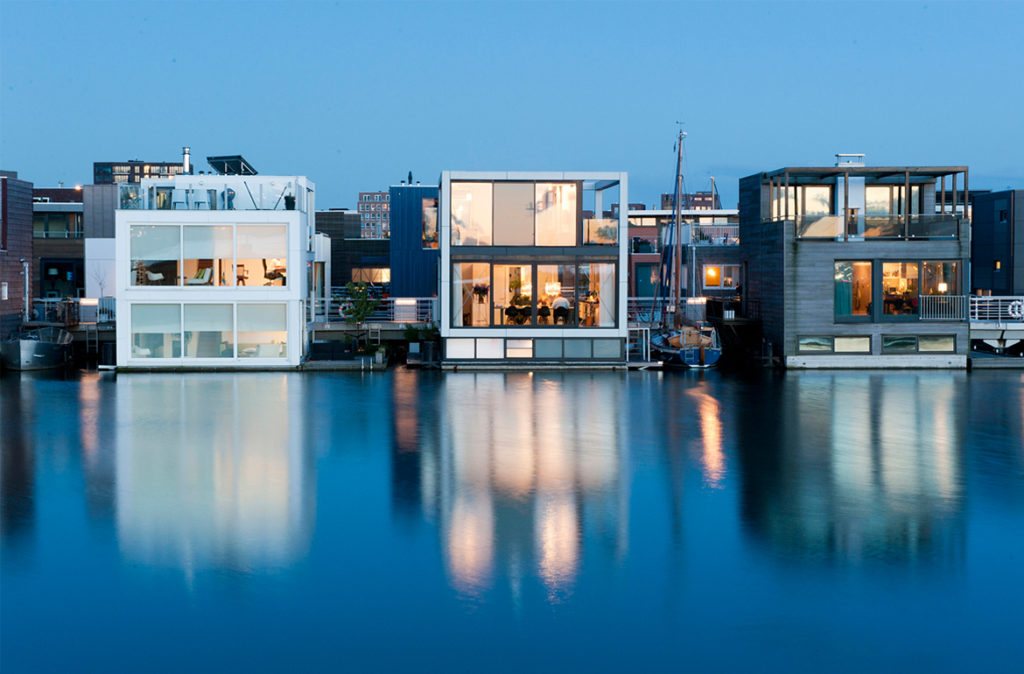 The architects of Waterstudio.NL not only design floating houses in the luxury segment in the IJburg district of Amsterdam but also in the rest of the world. © Koen Olthuis – Waterstudio.NL

New living space on the water

Whether it’s Asia, the US or Europe, living space is becoming an important resource in the major cities of the world. Most cities have little room to grow in the central urban area and increasing rents are symptomatic of this crisis. Metropolitan regions in the immediate vicinity of water are trying to develop new living spaces with floating houses in response to the housing shortage.

Floating houses take care of two problems at once: They meet the demand for living space in large cities and also serve as flood protection. Coastal cities in particular are extremely affected by climate change and the resulting rise in sea level. They are therefore looking for new strategies to cope with the water and turn the disadvantage into an advantage.

It is no wonder that the Netherlands is considered a pioneer when it comes to floating houses. Around a quarter of the country lies below sea level. For the Dutch, water has long been an important element of urban planning. Amsterdam is a major European city known worldwide for the many houseboats that create additional living space in the canals.

However, not only do the residents of Amsterdam live on the water in the city centre but also in the eastern part of the city. The new IJburg district was created here on artificially raised sand islands. In the first construction phase, a total of 18,000 apartments with living space for 45,000 people were created. The Waterbuurt district in the western section of IJburg was also planned at the same time – the Floating Houses IJburg project by Amsterdam-based Marlies Rohmer Architects & Urbanists.

Lacking a firm subsoil, the neighbourhood functions primarily with bridges and jetties, which provide access to the residences. Gardens are not allowed, but living close to the water makes up for it. A lock ensures that the inland sea on which the houses float is separated from the IJMeer. This prevents the apartments from drifting out to sea. The project was completed in 2011 and included both social housing and condos.

Architecturally, however, IJburg is still a long way from being fully developed. To the east, the “Water District” continues to grow. By 2020, the Dutch architectural firm Waterstudio.NL wants to complete around 380 additional apartments, offices, floating gardens and a restaurant. Everything is possible for the architects – from a bungalow to a three-storey residential building.

Amphibious houses on the Thames

Other countries, such as Great Britain, are also discovering water as additional living space. This is how the amphibious houses near Marlow on the Thames in Buckinghamshire came to be. The homes were designed by Baca Architects in London. When the tide is low, the house rests on the ground like a conventional building and can also float in the event of flooding.

This is made possible by a kind of dry dock made of reinforced concrete, which serves as the base of the house. As the floodwaters fill the trough, the house is buoyed up to the surface of the water. An anchoring system keeps it in position and buoyancy is ensured by air chambers under the floor.

Living on the water: The future is now

In Hong Kong and Macau, people have been living on the water for a long time – in jungle settlements consisting of old sailboats that have fallen into disuse. In the US, water communities also have a long tradition. Seattle has one of the largest collections of floating houses in Portage Bay and Lake Union. And Germans are also finding life on the water more and more attractive.

In Hamburg, for example, additional moorings for houseboats and floating houses are being built. The idea of floating architecture is no longer a vision of the future, it is a reality. People learn to live with water and use it for urban development. And not only in Europe or Asia, but throughout the entire world.