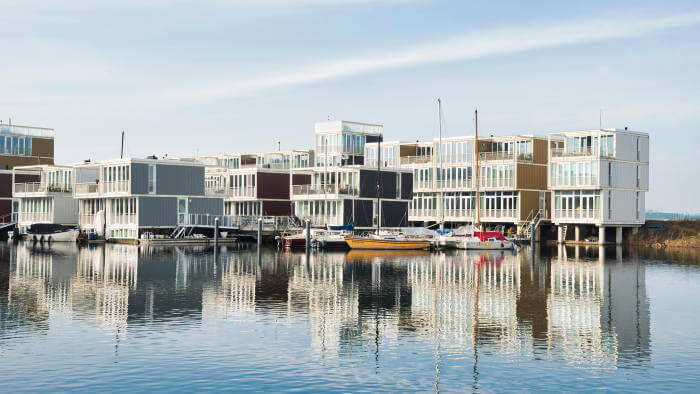 New York, London, Shanghai, Jakarta, Manila, Houston, Miami, Rio de Janeiro — all these cities and more are threatened by potential rises in sea level from climate change. Without dramatic action, in a century or less some of the world’s most expensive real estate could be under water. So it is unsurprising that architects and engineers are looking seriously at a future of floating cities. As often with water engineering, the Dutch are at the forefront. Living in a country which owes its existence to the struggle to find equilibrium with the sea, they are the pioneers of a small but increasingly important-looking architectural future. A short tram ride from central Amsterdam is IJburg, a well-planned suburb of decent housing and wide roads built on reclaimed land. At its edges the streets dissolve into jetties and houses sit on the water. One of the first large floating suburbs, it is an enticing vision of water living, with houses on concrete rafts and ducks swimming between. These are well-designed and built homes for city workers priced out of the centre of a city affected by gentrification, tourism and Airbnb-style rentals. Some houses are minimally modernist, others quirkily eccentric. Some look like suburban cottages on water, others like streamlined nautical hybrids, ready to sail away. One neighbourhood, Steigereiland, was built by architects Marlies Rohmer, an elegant Bauhaus dream of white walls, flat roofs, steel and glass. Could this be the future? Architect Koen Olthuis (“the Floating Dutchman”) has been at the forefront of floating design. “We love the water in Holland and we need to learn to see it as a tool,” he says. “I’ve seen floating architecture go from freak architecture to a real proposition. A hundred years ago the invention of the elevator allowed us to build vertically; now we need to understand water as an extra dimension for cities.” Mr Olthuis, whose Waterstudio practice has designed and built more than 200 floating buildings and who has plans for everything from entire cities to a football stadium, calls the floating metropolis a “blue city” and sees a four-stage process in its development. “They start in the city,” he says, “on the waterfront, where there is an established real estate market. Then they go into the sea but are still connected to the land via their energy and sewerage et cetera — which is an alternative to expensive land reclamation. The third phase is going into the sea, 1km into the water, but still connected, and the fourth is the self-supporting city in the sea with all its energy generated in the ocean.” What is the point of that? “I don’t know,” he laughs, “but rich people love the idea — an unregulated haven!” “We have 2bn people threatened by floods, these problems are in the cities right now.” Is this really a realistic solution to problems of urban overcrowding and resilience? “The big guys [the ‘starchitects’] are now showing idealistic cities in the ocean.” These are fantasies, he says, “but we have to group together as architects to make realistic proposals”. Mr Olthuis also worked on the Arkup, a “liveable yacht” launched last year in Miami. A luxury house with hydraulic legs which can be lowered to the seabed, it has solar power, desalination and a motor. He is also working on structures for the world’s slums, building a mobile platform in Bangladesh which uses waste plastic bottles for buoyancy. These will house toilets, internet stations, communal kitchens and other facilities. Floating architecture’s recent history has not all been plain sailing. Nigerian architect Kunlé Adeyemi designed the Makoko floating school for a Lagos slum. It looked like the perfect project — worthy, elegant and innovative — but it was destroyed by a storm. The idea of a mobile floating architecture is among the more promising futures. Mr Olthuis has even designed a sports stadium. “A football stadium could be leased by a city,” he says. “Why spend all that money? Rent it, like a car.” Architect Alex de Rijke also raises flexibility. “Cities have master plans but plans change and one of their failures is their inability to adapt,” he says. “A floating city could be endlessly reconfigured.” His practice dRMM’s plans for a “Floatopolis” in London’s Docklands show a city of multistorey structures. It went from research project to possible commission but was not built. “The world’s cities are full of post-industrial waterfronts,” Mr de Rijke says. “We were looking at how you create a community, with schools, shops and most importantly density. “We have overpriced land in London, a restrictive planning system and the paradox of a low-density city.” The floating city idea, says Mr de Rijke, goes in a cycle of fashion, “like the tide coming in and going out”. It is a relatively expensive way to build, with prefabricated concrete rafts and high-specification components. But in big cities or densely populated countries such as the Netherlands or UK, where land is expensive, it can be an economical solution. As the technologies become more mainstream, costs will fall. Of course, city centre waterways are a finite resource — but they may be becoming much less finite soon. The tide is coming in.